Letter: Vote ‘No’ on the bond issue | PostIndependent.com
YOUR AD HERE »

Letter: Vote ‘No’ on the bond issue

In the upcoming city election we are being asked to vote on two separate issues, the first, Ballot Issue A the sales tax issue, I suggest you vote your conscience on the sales tax increase.

The second, Bond Issue B, to allow the city to sell up to $16 million in bonds to be repaid over an unstated period of time at a cost up to $2I million. I suggest a “No” vote on the Ballot issue B.

If Ballot Issue B does not pass and the sales tax increase does pass, the city will save up to $5 million in interest payments. That $5 million could be better used for fixing our streets. If the bond issue passes, will the city will use revenue from the proposed increase in sales tax to pay interest and principal on bonds?

What I am confused about is, how much the city really plans to bond for? I have seen two figures. In the information pamphlet sent out by the city it states “Shall the City of Glenwood Springs debt be increased up to $16 million?” The front page of the Post independent on March 11 stated “…through a $56 million bond issue.” How much of a bond issue are we voting on?

Let’s force the city to operate on a cash flow basis, pay as they build and no borrowing.

Vote “No” on Ballot Issue B, the bond issue. 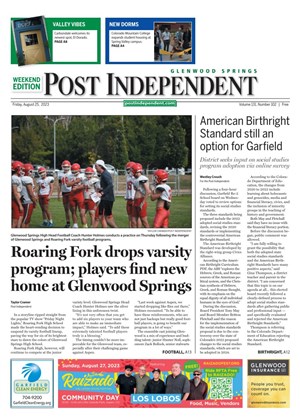